Food and Cooking on Early Television in Europe: Impact on Postwar Foodways 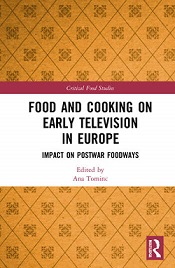 Food and Cooking on Early Television in Europe: Impact on Postwar Foodways

This collection critically examines the role of food programming on European early television and the impact this might have had on food habits and identities for the European audiences. It foregrounds various food programme genres, from travelog, cooking show and TV cooking competition, to more artistic forms. For the first time, it examines in one place eight European countries, from Portugal to Czechoslovakia and Britain to France and Yugoslavia, to explore ways in which television contributed to culinary change, demonstrating differences and similarities in which early food programme in Europe shaped and promoted progress, modernity, gender and national identities in both Eastern and Western Europe.

Featuring a number of archival images that illustrate early food programme visually, this collection complements other research into postwar food history, adding a perspective of visual medium that is often neglected. As such, it should be interesting for food and media historians as well as those interested in European postwar history and culture.